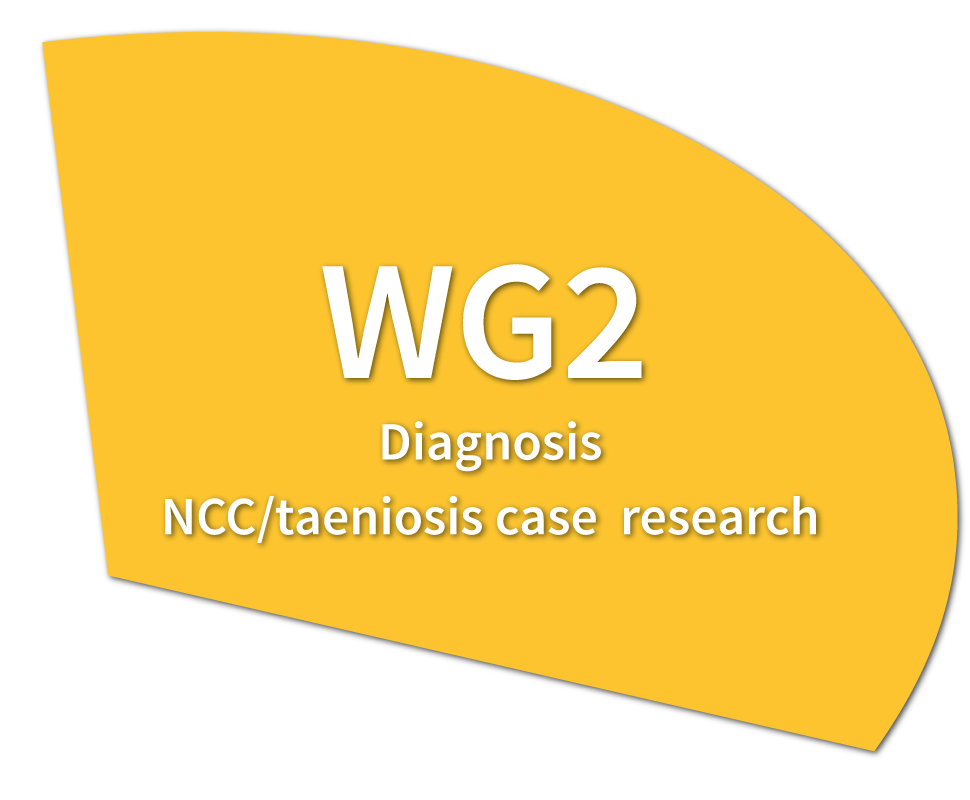 NCC is a complex disease with many different clinical presentations, depending on the number, stage and location of the cysticerci, but also on host age, immunity, parasite genetics, etc. Treatment of cysticercosis is cumbersome and needs hospitalisation of patients. In the last decade, there has been an evolution in cases from old/middle-aged people in rural areas (no travel history), to younger people (young immigrants or young European travellers) in urban centers. There are indications that disease patterns and treatment responses are different not only between these different age groups but also between the origins of the groups (traveller, immigrant, local, endemic-non endemic areas…). Up till now different diagnostic tools are being used; and different treatment regimens followed. There is an obvious need to define more harmonised case management procedures as well as to endorse an improved follow up and reporting system for NCC cases within the European Union.

Taeniosis can be easily treated by the use of anthelmintics, however more and more reports from studies in the developing endemic countries indicate treatment failures, and call for more in depth research.

Many different diagnostic techniques have been developed for the detection of (N)CC (human and animal) or taeniosis, to be used in the field, abattoir or clinic, all with their respective pros and cons. A number of immunodiagnostic test have been established, among which the enzyme-linked immunoelectrotransfer blot (EITB) that detects specific antibodies in serum and has a high specificity and sensitivity. This test is widely recognized; unfortunately it is expensive and in a format not very applicable in most resource poor laboratories in endemic areas. More field applicable ELISA test formats have been developed to detect specific antibodies and antigens in the serum. Existing antibody ELISA’s based on crude antigen, purified proteins/ recombinant proteins or synthetic peptides have until now failed to produce consistent good results of high specificity and high sensitivity; however, research is ongoing into the development/identification of new markers for diagnostic tools. The current antigen detecting ELISAs is based on monoclonal antibodies that detect excretory/secretory proteins produced by live cysts. As such the test detects viable cysts only, which has several epidemiological, clinical and public health implications. In epidemiological studies the presence of antigens indicates presence of infection, while presence of antibodies indicates exposure to the parasite, but not necessarily establishment of infection. In clinical cases (people with NCC) the treatment choice and follow up can be altered depending on the presence of live cysts. In the animal intermediate hosts, only viable cysts are a public health concern.

The main drawback of most techniques is their non-applicability in endemic areas because of high cost and/or need for expensive laboratory equipment; and lack of sensitivity/specificity.

There is a call for European research groups in collaboration with private diagnostic companies to tackle this problem in an innovative way. Different research groups are currently carrying out in depth analyses of the parasite (at the ‘omics’ level) in which concerted action with technology exchange should be envisaged. The latter includes prime opportunities for exchange of young researchers. Also, the latter fundamental analyses can potentially identify markers not only for the development of new diagnostic tools, but also for new vaccines. The TSOL 18 (HP6) recombinant vaccine has been very efficient at reducing infection in experimentally and naturally infected pigs. However, until now, three immunizations and a treatment are required; also, questions remain on the age of vaccination and the duration of the protection. A number of other vaccine candidates have been studied, though, with less success.

The main objectives of this WG are to